Was FDR an anti-imperialist?  Had he led the United States following WWII, would the history of American-Indochina relations have been different?

Background:  FDR is noted for guiding America through the Great Depression and WWII.  During that worldwide depression, some countries resorted to aggressive expansionist policies in order to emerge from the crisis.  In 1931, WWII began in Asia when Japan invaded Manchuria expanding its military influence in a bid for raw materials.  Hoover, the President at the time, and Stimson his Secretary of State responded by simply not recognizing Japanese aggression and conquests.  Germany reoccupied the Rhineland and annexed Austria and part of Czechoslovakia.  America supported appeasement.  By 1941, France had fallen to Germany and Japan had extended its reach into Southeast Asia taking over French Indochina.  FDR began maneuvering to support the Allies and in August of 1941, he and Churchill outlined their vision for an alliance that was dedicated to a new world order following the conflict.
Documents:
Questions for Examination: 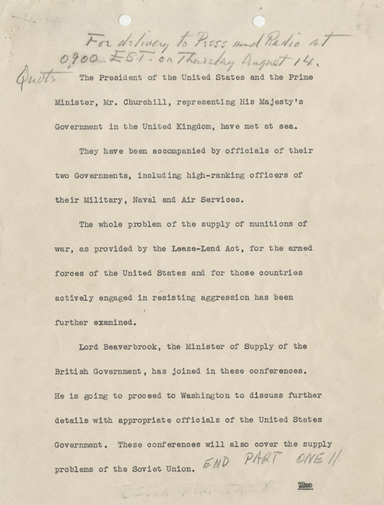 The Atlantic Charter, August 14, 1941
"The President of the United States of America and the Prime Minister, Mr. Churchill, representing His Majesty's Government in the United Kingdom, being met together, deem it right to make known certain common principles in the national policies of their respective countries on which they base their hopes for a better future for the world . . .

First, their countries seek no aggrandizement, territorial or other;

Second, they desire to see no territorial changes that do not accord with the freely expressed wishes of the peoples concerned;

Third, they respect the right of all peoples to choose the form of government under which they will live; and they wish to see sovereign rights and self government restored to those who have been forcibly deprived of them;

Fourth, they will endeavor, with due respect for their existing obligations, to further the enjoyment by all States, great or small, victor or vanquished, of access, on equal terms, to the trade and to the raw materials of the world which are needed for their economic prosperity;

Fifth, they desire to bring about the fullest collaboration between all nations in the economic field with the object of securing, for all, improved labor standards, economic advancement and social security . . ." 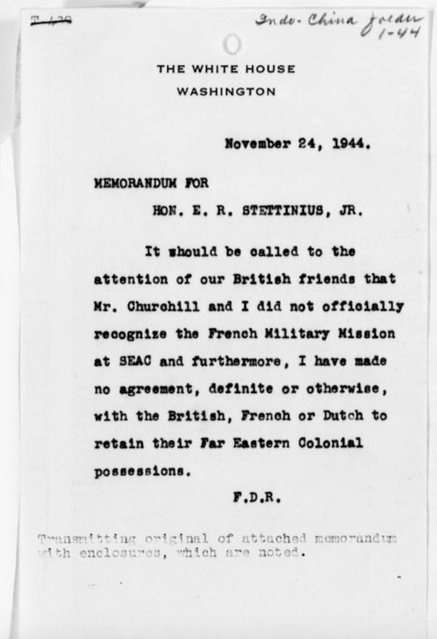 In this wartime memo, FDR tells his Secretary of State Stettinius that the Southeast Asia Command is not authorized by him to re-take former Dutch and French possessions. 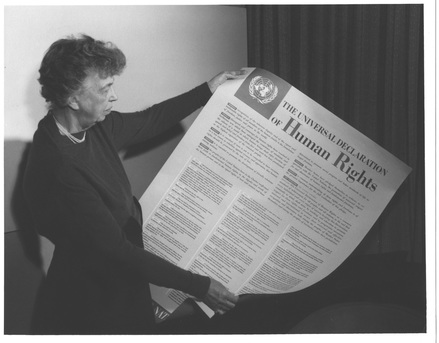 In 1948, The Universal Declaration of Human Rights was adopted out of a UN committee chaired by Eleanor Roosevelt, widow of FDR.